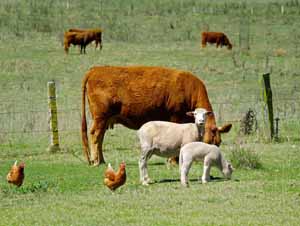 Many people still belief that eating meat is necessary for human survival. Many also believe a sustainable community means breeding or hunting all the meat they need to sustain their lives.

Project TriStar views sustainability and the relationship between man and nature quite differently from that model. Project TriStar understands the cause and effect of consuming meat on several levels including: necessity, health, food production, required skill sets, care and feeding, and sustainability.

After extensive analysis of these considerations and more, Project TriStar has defined the community diet as meat-free. This commitment means not raising domesticated animals for the consumption of food or animal byproducts and no hunting of animals to supply meat for humans or pets. 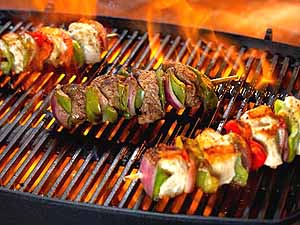 This doesn’t mean that humans can eat the same foods or the same way that either the herbivore or carnivore eats. For human consumption, all meat must be cooked to kill the harmful bacteria that can cause disease, illness, and even death in humans. In a similar respect, vegetables must be rinsed or washed somewhat to avoid the potential of parasites and similar bacterial problems.

It’s also known that temperatures above 160 degrees Fahrenheit are generally required to kill the bacteria in meat products. This means that any enzymes, protein, or minerals in meat are literally destroyed along with the bacteria while the meat is cooked for human consumption. Instead of nutrition, what people receive when they eat cooked meat is generally just a sense of fullness that tricks the mind into believing that the body has received nutrition.

The reality is that there are no enzymes, protein, vitamins, or minerals in meat (cooked or raw) that humans need or that can not be received through other vegetable or mineral food sources. It has also been proven that people can not only survive without eating meat, but they can experience even greater health with a meat-free diet. 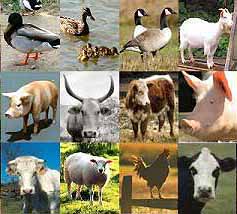 Unless someone has lived on a working dairy or cattle farm where 100% of their food was either from the garden or the livestock, they may have a big surprise ahead of them when considering an animal-based diet in a sustainable community.

People tend to think that it’s easy to raise animals for food. That all you need to do is let the animals roam free on the land and collect them or their byproducts when you need them. This may be true in the most ideological circumstances, but the reality is that every different animal comes with its own unique set of benefits and risks.

The domesticated animal kingdom is very sensitive to changes in the environmental and generally even more so than their wild ancestors. The only reason why livestock death and disease is not more widely publicized or known to the average person is due to the fact that the health of mass produced domesticated livestock is constantly being supplemented with hormones, steroids, and antibiotics. 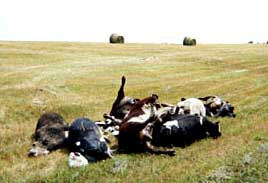 Even in recent times, we’ve all heard of mad cow disease and how entire farm herds and herds from multiple farms have been destroyed to reduce the spread of this disease. Do people realize they could, would, or have eaten diseased meat without even knowing it? Do people realize that it takes more than just letting animals graze in the field in order to ensure their livestock food supply does not die off from disease?

The simple fact is that maintaining any animals for personal consumption or consumption of their byproducts requires experience. Without such experience, a community could wake up one morning to find their source of meat is no longer viable and thus, their community may no longer be viable.

If such a catastrophic reduction in animal population were to occur, how long would it take to repopulate the herd? Anyone who has experience raising domesticated animals knows that it can take years and even decades to naturally replenish a herd that has been decimated by an unexpected act, and if the decimation is severe enough, possibly never.

It is true that the same type of decimation could happen with vegetable crops. Unlike domesticated animals, vegetable crops can be grown indoors or outdoors, mature in a much shorter time span, and can be started from stored seeds rather than generations of breeding. It would literally take only weeks or months to be back in full production with either the same or different strains of vegetables. The reality is that a community that sustains with a primary food supply that is animal-based runs a much higher risk than one that sustains from a plant-based food supply. 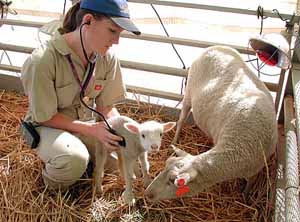 Like any other skill, raising animals for food production is something that requires more than simply reading a book. It requires practical experience and the greater the experience, the greater the probability of success. The raising and care of animals as a food source is not simply feeding and harvesting. As a complex biological organism, cows, chickens, goats, pigs, etc. all come with their own unique risks and care requirements.

In times of old when people depended on their ability to produce all of their food needs by themselves, children grew up with the knowledge and experiences of raising animals. Often this was supplemented with older family members who provided two or three generations of knowledge in a single household. This did not guarantee that a solution to a livestock problem was immediately available, which is why there was an eventual need for the veterinary industry. 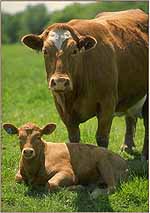 Another important factor in raising livestock is knowledge of animal husbandry. The only way to maintain the health and sustainability of livestock long-term is by routinely introducing a new and unique genetic strain into the existing herd. This is more important for some breeds of livestock than others, but must generally be done every few years to ensure the health of the herd. Inter-herd breeding will eventually produce animals that are more susceptible to illness and disease as their immune systems become increasingly compromised.

Before anyone considers the care, feeding, breeding, and maintenance of animals for a food source, a community would be wise to have someone experienced with the specific breed of animals. This might be someone who has operated a farm or alternatively someone who is experienced in veterinary medicine. Anything less would be irresponsible to yourself, your family, or a community. 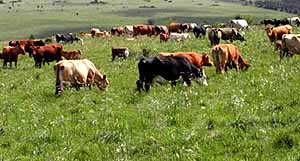 Depending on the community location, size, and type, the maintenance requirements for an animal-based diet can be extensive. This is due to the fact that all domesticated animals used as a food source are herbivores and as such, eat vegetation. Whether that vegetation is wild in nature or needs to be produced as part of the community crop production depends on many factors, however, this means the care and maintenance needs for the livestock are primarily to ensure they are feed.

Without first hand experience, it might seem that maintaining livestock for food simply means letting the animals graze off the natural landscape and then harvesting the animals as needed. This couldn’t be farther from the truth. 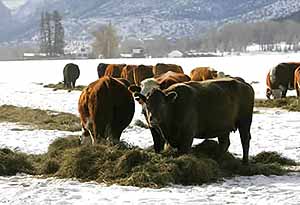 Let’s start by discussing growing seasons. Unless the environment is such that animals can graze off the land year round, the community will need to harvest and store crops to feed the animals. Depending on the location, this could be due to winter, monsoons, or even an annual period of drought. Whatever the case, it is essential that food for the livestock be stored for either cyclical weather patterns or the unexpected weather anomaly.

Obviously, the longer the period where crops can not be grown, the more crops need to be harvested and stored. Depending on the location of the community, the storage requirements could range from 1 month to even 5 months. This means that manpower and resources are required to plant, harvest, and store food for the maintenance of livestock even if the only reason is in case of a natural disaster.

How much food is required to maintain domesticated livestock? In order to provide a realistic picture, we will discuss the grazing needs, as well as the harvesting and storage needs. For simplicity sake, we will only consider the grazing and harvesting needs for cows and goats. In the summer or grazing months, 3 to 4 acres of prairie grass are required to sustain an average cow and one-quarter acre for each goat. From here, it doesn’t take much to calculate the number of acres of fertile prairie land to support a herd of any size. 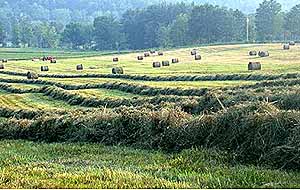 Let’s consider the harvesting, curing, and storage needs for the off season or winter months. To do this, we will recalculate the consumption requirements of the cow and goat as the weight of food per day rather than acres of prairie grass per season. This also assumes the nutritional value is similar to that of the same prairie grass habitat. If the feed was derived from a planted crop such as alfalfa or hay, the volume required to feed the livestock could be reduced by about half.

The average goat (each goat) consumes approximately 5 to 7 pounds (2 to 3 kg) per day which equates to 42 pounds (19kg) per week and 180 pounds (82kg) per month. Goats don’t drink nearly as much water per day as a cow, but in either case, water consumption also depends on whether the animal is producing or being harvested for milk byproducts. 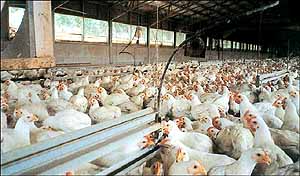 On every level of historic colonization, humans have over populated, over hunted the wild animals, and over consumed the resources until the only way they could survive was to move to another location or more recently, alter the species to fit our new consumption needs. This begs the question, have we learned anything from history? 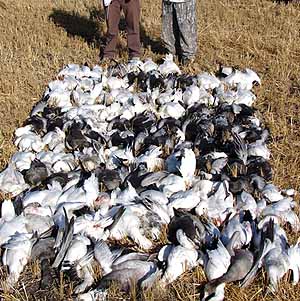 Now consider the creation of a new community that is based on the same principles of food production and consumption. What makes anyone think this time will be any different? What happens if infection, disease, or some catastrophic event causes mass extinction in the community livestock population? Will the community then resort to hunting in the wild as its new source for meat?

If we’ve learned anything from history it’s that the wild animal kingdom is not capable of supporting the human populations’ ravenous appetite for meat. The reality is that there will still be too many people hunting and the animal population will be rapidly diminished until people are starving once again. And when people are starving, there is little or no consideration for moderation.

Besides the inherent risks with an animal-based diet, do people really believe the perceived benefit of such a diet is worth the excessive use of resources to maintain it? Why does it make any sense to grow, harvest, and store crops for livestock or to house and maintain animals when you would need only a fraction of the resources to simply grow vegetables for human consumption.

Once again, the choice of a diet based on animal versus vegetable comes down to the consumption of resources, practicality, and conscious responsibility. The only community diet that addresses these historic risks and human tendencies towards the animal kingdom as a food source is a diet based on growing vegetables as the primary or only source of food. Communities that have prepared to live a vegetarian lifestyle have the greatest chance for long-term sustainability.